Here are a few more scary stats to set the scene…

Food for thought isn’t it, and yes we all know that stats can be rolled out to support almost any claim, but these are different. They only support what we already know…The cyber-attack threat is real and we all need to be aware and prepared for it.

As defences against cyber-attack have evolved and become more effective, so have the methods employed by those that perpetrate those attacks. They probe and test every facet of a system, in a top down search for weak points to exploit, cracks through which they can slip in and wreak their own particular brand of havoc. Emerging technologies like IoT, mobility, and hybrid IT environments now open new business opportunities, but they also introduce new risk. Protecting servers at the software level is no longer enough; businesses need to reach down into the physical system level to stay ahead of threats.

Hewlett Packard Enterprise (HPE) has a strategy to deliver this through its unique server firmware protection, detection, and recovery capabilities, as well as its HPE Security Assurance….Introducing the HPE Silicon Root of Trust. 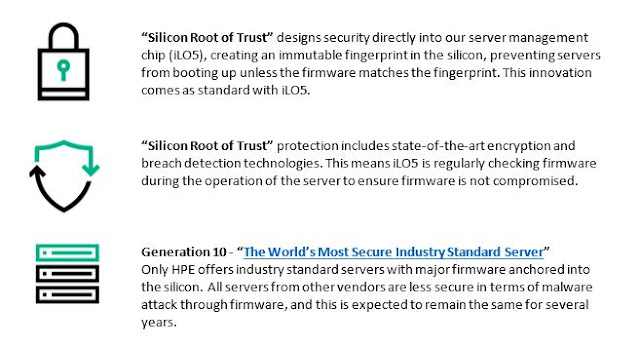 Each HPE platform has a root of trust that is burned into the silicon components on the motherboard, making it literally impossible to compromise, because the system cannot boot without this circuitry. This silicon root of trust begins with the HPE iLO management controller, which is an HPE-specific design, much more advanced than the more generic and lower cost Aspeed BMC popular with many other vendors.

HPE iLO’s intellectual property is owned solely by HPE, and it owns the firmware as well, with a strict process for both access and sign off on changes. This is a large differentiator that HPE can deliver, because it designs and produces its own products. Even the software operating environment for iLO is different - it utilises HPE-controlled software tools, making it more difficult to compromise relative to the more generic Linux-based tools that most other vendors use for their management controllers.

As an established and trusted distribution partner of HPE for over 30 years, Westcoast have seen the server market evolve and take quantum leaps during that time.

The HPE Silicon Root of Trust is a game changing innovation that closes off a potential route into your system, a route that those with nefarious intent could otherwise have taken with impunity, and a route through which they could have potentially unleashed untold damage.

Let's chalk this one up as a win for the good guys shall we...